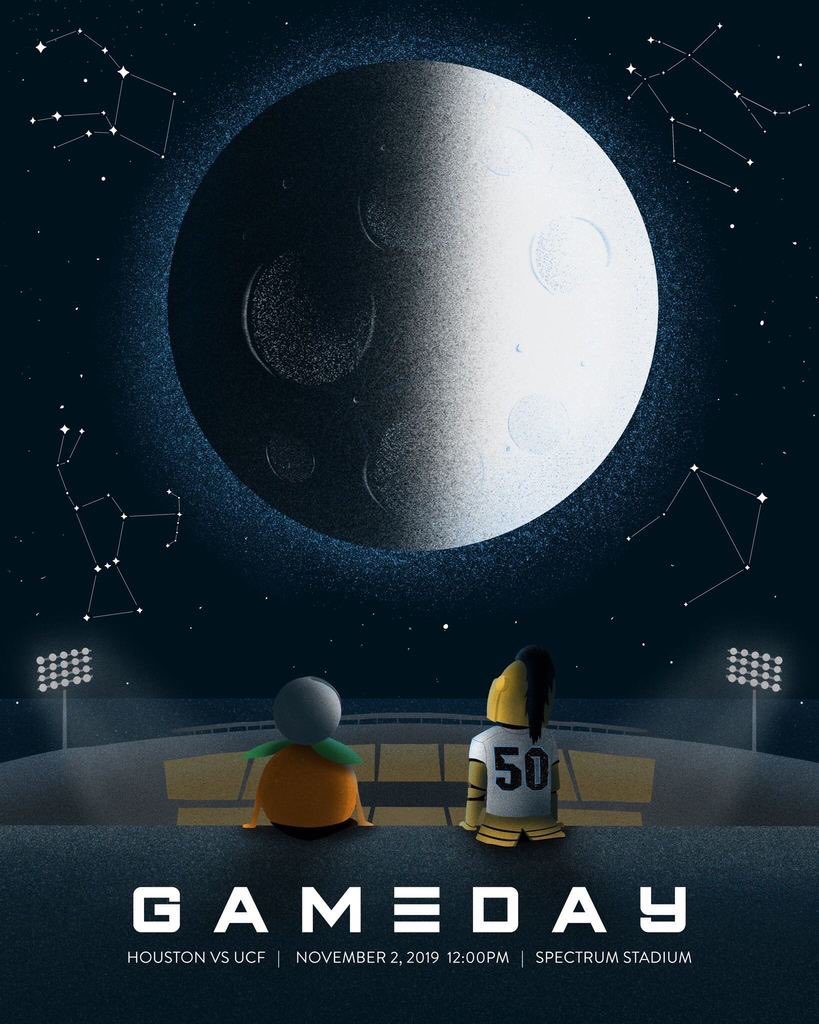 UCF’s original unofficial mascot Citronaut and current mascot Knightro watch a half moon together in this year’s “Rendezvous With the Stars” game day poster. Image courtesy of UCF.

John Heisler reported in his article, “UCF Football Uniforms Have Become A ‘Thing’,” that today’s uniforms give UCF a reason to tribute its early years–the late 1960s when the original unofficial UCF mascot was the Citronaut, a nod to both the Florida citrus industry and to the university’s connection with NASA and the space program, which both began in 1963.

The Knights’ constellation jersey highlighted the names of the different streets located on the Knights’ main campus. The Pegasus constellation replaced the regular pegasus logo normally located on the players’ shoulder. The design of the players’ pants had USA vertically shown in red, resembling the vertical red USA marking on the Apollo 11 rocket.  An image of the “Citronaut” appears on the team’s jersey and pants. To learn more about UCF’s Space Game attire, visit http://www.UCFSpaceGame.com.

Citronaut, UCF’s first unofficial mascot, first appeared in the 1968-69 school catalog. The Citronaut mascot accompanied the official mascot, Knightro, to cheer on the home team Knights to victory over the Houston Cougars.

The UCF Knights (6-2, 3-1) showed a slow start at the beginning of today’s showdown with the Houston Cougars (3-5, 1-3). Houston scored the first touchdown of the game within the first three minutes by Car and kicker D. Witherspoon for a beginning score of 7-0, Houston. Witherspoon picked up a 45-yard field goal with 5:29 remaining for a 10-0 lead over the Knights. The Knights’ offense began to organize themselves and Williams completed a 6-yard touchdown pass from Gabriel. UCF’s kicker Barnas picked up the extra point for a score of 10-7, Houston. Both teams continued to battle it out and picked up another touchdown each by the end of the first quarter for a score of 17-14, Houston.

UCF entered the second quarter organized and ready to show the fans their presence. Quarterback D. Gabriel kept possession of the ball for 22 yards into the end zone for a UCF touchdown and UCF’s first lead of the game with Barnas moving the score to 17-21. Houston’s Witherspoon earned the Cougars two field goals during this quarter: the first at 4:00 left of the quarter and the second as the clock counted down to halftime. These scores provided Huston with the lead 23-21 at halftime.

The Knights regrouped during halftime and returned to the field determined to regain control. Five minutes into the quarter, running back B. Thompson scored a 47-yard touchdown and Barnas’s kick was good for the extra point (23-28 score), returning the lead to UCF. Wide Receiver T. Nixon completed a 34-yard pass from Gabriel for a touchdown with another extra point (23-35, Knights). With 40 seconds left on the clock for the third quarter, Thompson and Barnas earned the Knights one more touchdown (23-42), providing the Knights with a comfortable lead going into the fourth quarter.

In the final three minutes of the game, Houston shrank the Knights’ lead to 29-42 with a touchdown, but was unsuccessfully in a 2-point conversion attempt. The final score for the “space game” was a two-point safety for the Knights (29-44), successfully sacking Houston in their end zone. This is the first safety UCF has earned since their August 31, 2017 match against FIU.

The UCF Knights won with a final score of 29-44 over the Houston Cougars.