MIAMI (AP) — Bob Dylan has been telling stories through songs for 60 years. But recently America’s master lyricist has also captured moments in a new series of paintings that, just like his songs, are intimate and a bit of a mystery.

The most comprehensive exhibition of the Nobel laureate’s visual art to be held in the U.S. goes on display on Tuesday in Miami at the Patricia & Phillip Frost Art Museum. Forty new pieces by the 80-year-old songwriter will be showcased for the first time.

The exhibition with more than 180 acrylics, watercolors, drawings and ironwork sculptures will kick off the same week as Art Basel Miami Beach and will run through April 17 with no future stops announced yet. Tickets are $16 and are booked by hourly slots.

“Retrospectrum” includes some of Dylan’s works from the 1960s, starting with pencil sketches he made of his songs such as “Highway 61 Revisited” and “Like a Rolling Stone.” His pieces, loaned from private collections around the world, also include abstract sketches from the 1970s, and covers six large rooms. But the vast majority was created in the past 15 years. 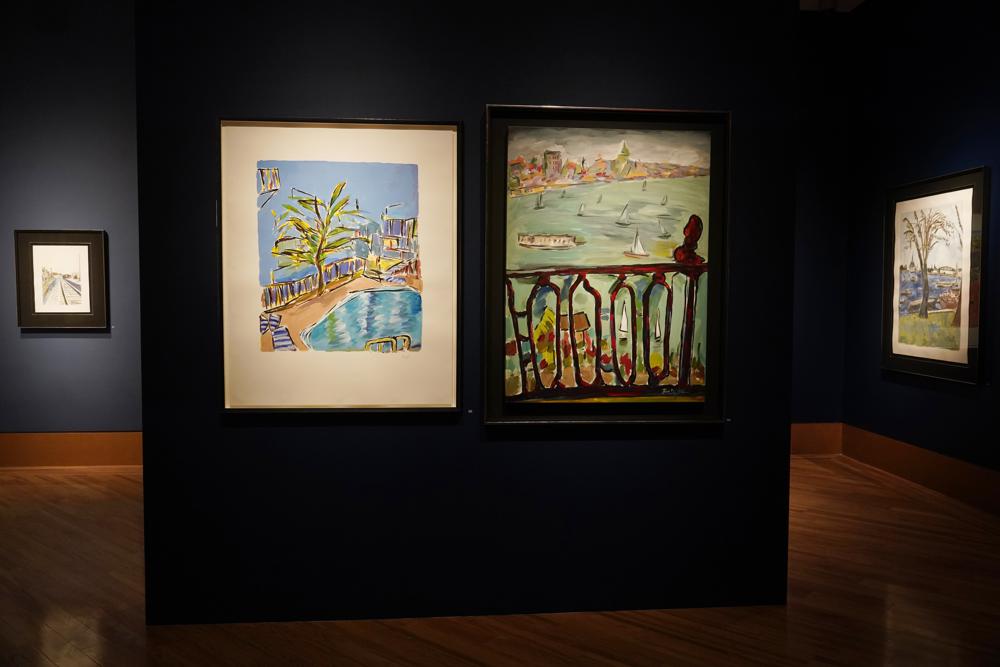 “He was recognized in every possible way as a writer, as a composer, as a singer, as a performer and so on. It is now that the audience sees also the last element,” said Shai Baitel, who conceived the show as the artistic director of the Modern Art Museum Shanghai, where it debuted. “Dylan is able to express himself in so many ways.”

A breathtaking giant canvas of a sunset in Monument Valley on the Utah-Arizona line serves as an introduction to Dylan’s newest works. He has mentioned his admiration of Western movie director John Ford, who used that same iconic landscape in many of his films.

Past the wall with the painting of the reddish buttes is a room with the new series called “Deep Focus,” named after a technique in cinematography where nothing is blurred out.

“All these images come from films. They try to highlight the different predicaments that people find themselves in,” Dylan is quoted as saying in one of the walls. “The dreams and schemes are the same — life as it’s coming at you in all its forms and shapes. 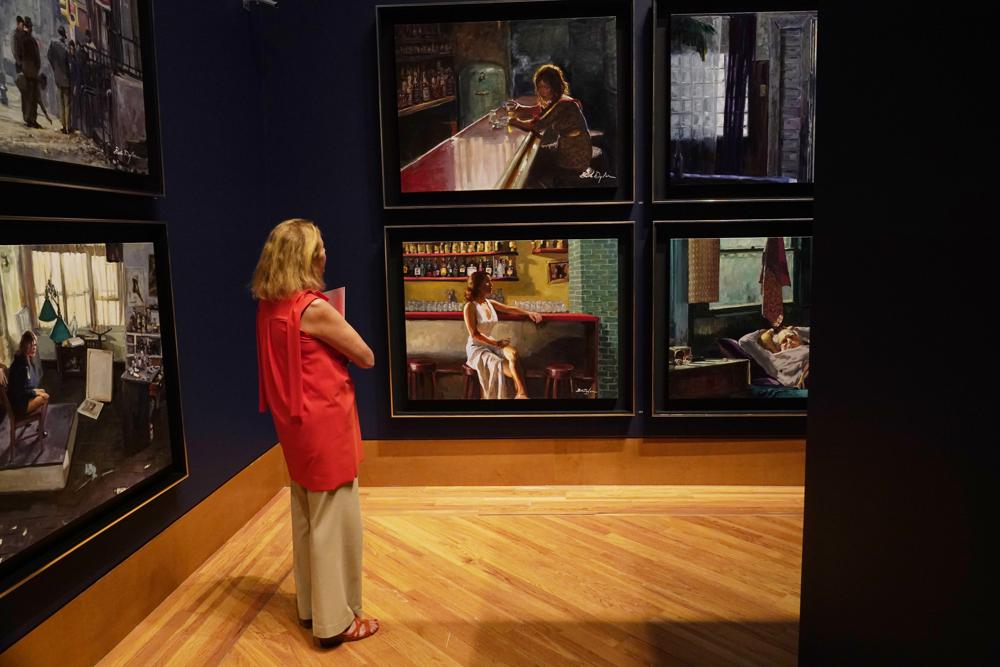 Dylan offers a lot of city life the way Ashcan School artists advocated when they depicted realistic images of people’s hardships at the turn of the 20th century.

A jazz band plays in a colorful club in one of the paintings; a gray-haired man counts wads of cash in another. He depicts two men fighting in a boxing match and portrays a woman sitting alone at a bar drinking and smoking with an intriguing look on her face.

Linking the images of Dylan’s latest works to specific movies will take some internet sleuthing.

Richard F. Thomas is a Harvard University classicist who has studied and written about Dylan. He said in an essay for the exhibit that he found online references tying one of the paintings showing a man in a black leather jacket pouring sugar on his coffee to a scene at a diner in the 1981 film “The Loveless,” where actor Willem Dafoe embodies a biker.

“Just like the scenes he has been creating in songs for all these years, the scenes of ‘Deep Focus’ will keep Dylan scholars busy in the years to come,” Thomas wrote.

Besides the works in his new series, other works that will be shown in Miami have been previously exhibited in places such as the Halcyon Gallery and the National Portrait Gallery in London. 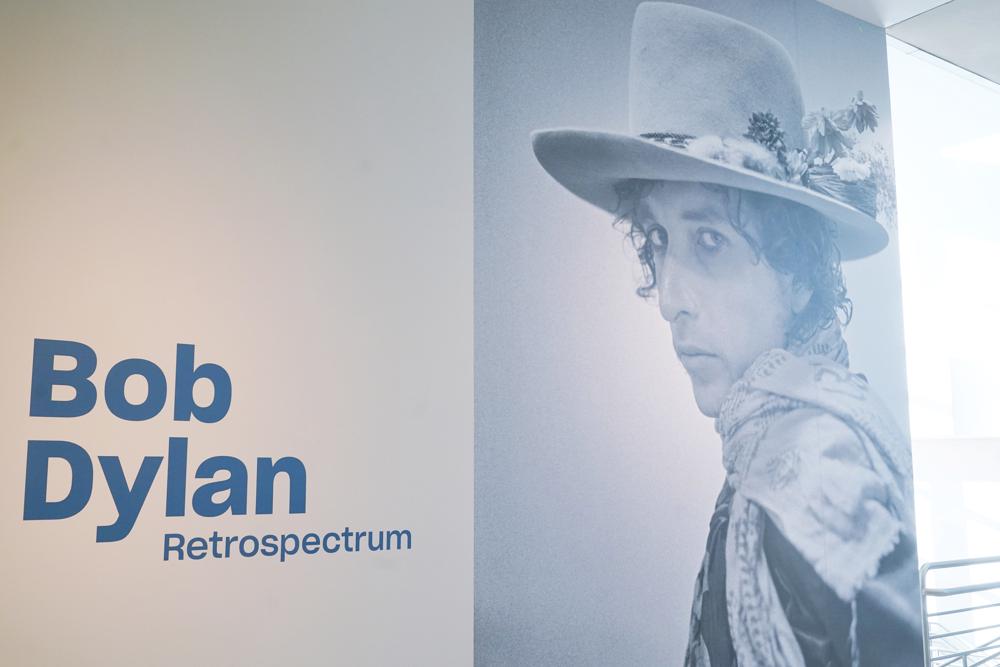 Previous paintings reflect images of America from the point of view of a road traveler. Realistic depictions of diners, motels, marquees, gas stations and railway tracks appear frequently throughout his artwork.

“It’s almost like looking at a pamphlet of his memories,” Baitel, the artistic director, said.

Dylan has also experimented with perspective, seemingly imitating the work of Vincent Van Gogh in “The Bedroom” to paint corners of a New York City apartment. And he has done variations by drawing the same characters changing the color of the backdrops and their clothing, or just depicting them at a different time of the day, like Claude Monet’s Rouen Cathedral series.

The exhibit has some interactive displays for music fans. The 64 cards with words from the lyrics of “Subterranean Homesick Blues” that he flipped through in one of the earliest music videos ever made were framed and lined up in eight columns by eight rows, while the clip is played on loop.

It’s not yet clear whether Dylan, who is currently on tour for his 39th album “Rough and Rowdy Ways” will pay a visit.

Jordana Pomeroy, director of the Patricia & Phillip Frost Art Museum, said it will be its first ticketed event since the museum first opened in 2008. The Florida International University will be holding a symposium on Dylan inviting scholars to discuss the songwriter’s entire body of work.

“That’s the treatment we are going to give Bob Dylan,” Pomeroy said.