In an unusually critical speech that lamented the public’s flagging confidence in the independence of the judicial branch, a federal judge slammed President Trump for “feeding right into this destructive narrative” with repeated attacks and personal insults toward judges he dislikes.

U.S. District Judge Paul L. Friedman of the District of Columbia said Trump’s rhetoric “violates all recognized democratic norms” during a speech at the annual Judge Thomas A. Flannery Lecture in Washington on Wednesday.

“We are in unchartered territory,” said Friedman, 75, an appointee of President Bill Clinton. “We are witnessing a chief executive who criticizes virtually every judicial decision that doesn’t go his way and denigrates judges who rule against him, sometimes in very personal terms. He seems to view the courts and the justice system as obstacles to be attacked and undermined, not as a coequal branch to be respected even when he disagrees with its decisions.”

The White House did not immediately return a request for comment early Friday on Friedman’s speech.

Other judges have raised similar concerns about Trump’s rhetoric and the increasingly partisan interpretation of judicial rulings, but as a senior judge and secretary of the American Law Institute, Friedman’s criticism carries weight.

Trump has denounced judges who have halted some of his administration’s most hotly debated policies, including his threats to withhold federal funds from sanctuary cities and his attempt to end the Deferred Action for Childhood Arrivals (DACA) program, which protects from deportation young undocumented immigrants brought to the United States as children. The president also has attacked judges over rulings that negatively affect him personally.

In 2017, Trump tweeted how a judge’s decision not to imprison Bowe Bergdahl, an Army sergeant who was captured by the Taliban in 2009 after walking away from his battalion in Afghanistan, was a “total disgrace to our Country and to our Military.” On the campaign trail, then-candidate Trump had suggested Bergdahl was a “dirty rotten traitor” who should be sentenced to death.

Trump also attacked U.S. District Judge Gonzalo Curiel, when the federal jurist from the Southern District of California was assigned to preside over a fraud case involving Trump University, a real estate seminar program. Trump suggested Curiel, an appointee of President Barack Obama, could not remain impartial in the case because of his Mexican heritage, despite the fact that the federal judge was born in Indiana and the case had nothing to do with immigration or foreign affairs. Trump ultimately settled the suit, which alleged the seminars used false advertising to ensnare attendees, for $25 million. 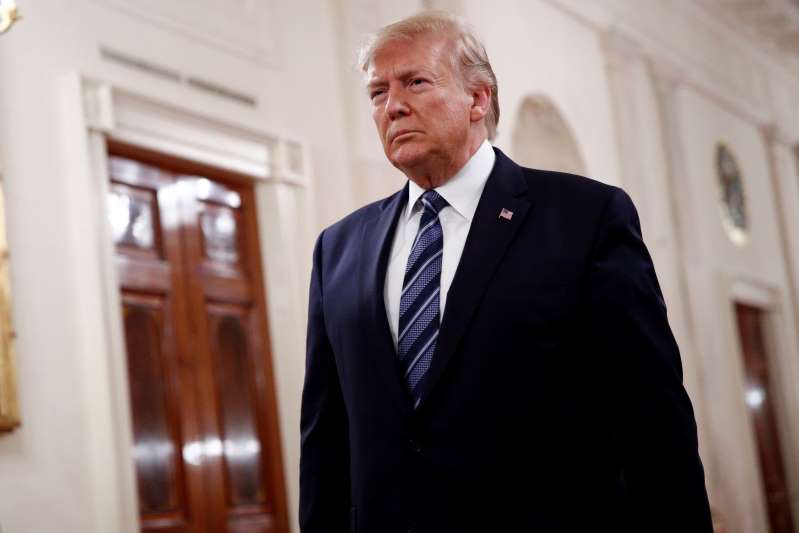 © Patrick Semansky/AP President Trump arrives to speak at a ceremony to present the Presidential Citizens Medal posthumously to Rick Rescorla.

“I have a judge who is a hater of Donald Trump,” the then-candidate said in May 2016, describing Curiel and accusing him of bias because of his ethnicity. Later, Curiel was assigned to rule on Trump’s plans to build a wall on the U.S.-Mexico border, and ruled in the president’s favor.

“This was beyond a dog whistle,” he said of Trump’s comments on Curiel’s ethnicity.

Trump has also referred to decisions he dislikes as the “tyranny of the judiciary” and a “gift to the criminal and cartel element in our country,” Friedman noted. He listed the ways Trump has denigrated judges: “so-called judge,” “disgraceful” and “political,” “a complete and total disaster.”

The federal judge also recalled a political promise Trump made to voters that he said threatens the independence of the judicial branch: “If it’s my judges,” Friedman recounted Trump saying during his campaign in June 2016, “you know how they’re going to decide.”

Friedman rebuked Trump for his political attacks against judges. He noted that Trump is not the first president to accuse the judiciary of overreaching, playing politics and “legislating from the bench.” Thomas Jefferson tried to make federal judges’ seats elected positions. Franklin D. Roosevelt tried to add six friendly justices to the Supreme Court — “a bad idea then and a bad idea now,” Friedman said. And Dwight D. Eisenhower later referred to appointing Earl Warren as chief justice of the United States as one of his biggest mistakes. But none of those former presidents used rhetoric as inflammatory as Trump’s, which has been “markedly different,” the federal judge said.

“This is not normal,” he said. “And I mean that both in the colloquial sense and in the sense that this kind of personal attack on courts and individual judges violates all recognized democratic norms.”

Friedman said he does not object to criticism of judges, but he suggested that incivility and political scorn had escalated to unacceptable levels in recent years. He also criticized journalists and other politicians, who he said increasingly identify judges by the president who appointed them.

“The reality is that when the Trump administration has lost cases in the courts, it is not because of Clinton or Obama judges,” Friedman said, “but because of judges who are trying to follow the law and the Constitution.”

Friedman took one final stab at Trump in his closing remarks, criticizing the president’s tendency to bend the truth.

“Unlike the other two branches of government, the courts are charged with making decisions grounded in facts,” he said, “never on alternative facts.”